Plastic pollution is a topic that has gained increasing amounts of attention in recent years. Through campaigns, documentaries, and scientific studies, more and more of us are becoming aware of the huge toll that plastic pollution is having on our planet. This issue seems to be impacting every corner of the world: whether you live in a city or on an island thousands of miles from the nearest landmass, evidence of plastic can be found. Whilst many items such as plastic bottles, disposable coffee cup lids, and balloons are only used by people for a matter of minutes, they remain in the environment for much longer, sometimes taking up to 1000 years to decompose. In the meantime, they can be washed out to the ocean where they cause a multitude of problems, absorbing water-borne pollutants before being ingested by the fish we eat, fragmenting into invisible microplastics, and even leaching toxins into the surrounding water.

So why does this matter to Alldays, 600km from the nearest coast? Could the plastic littered here still be impacting marine life? Unfortunately so. Last week, the AWCRC team took a drive to a section of the Mogalakwena River armed with bin bags, aiming to collect any litter we found before the rain arrives and fills the riverbed. Once the rain arrives, any litter dumped at the vicinity of the river will be carried along the river with the current until the Mogalakwena meets the Limpopo, after which it could be carried all the way the river mouth in Mozambique, where it would be free to float in the Indian Ocean for the foreseeable future. Transportation via rivers is just one of the ways in which 10% of the 250 million tons of plastic produced yearly makes its ways into our oceans. During our litter pick, we walked a 1.5km stretch of the river and managed to fill 12 bags with litter, restricted only by the number of bags we could fit in the back of the car! The vast majority of the litter collected was 2L plastic bottles, as well as many loose bottle tops and crisps and sweet wrappers. With the rains yet to come, we plan to attack more of the river in earnest to collect as much as possible before it is too late. 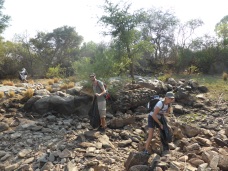 Collecting litter in the river bed 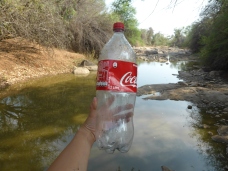 Following our litter pick at the river, the next day we visited Briershof Primary where we ran a session on water pollution and conservation. The kids were very engaged throughout the session as we discussed where our water comes from, how it can get polluted, and how we can conserve it. We played a game that demonstrated how leaky taps can waste lots of water (which the kids took part in very competitively!), after which they were offered the choice between a drink of clean water or a drink of ‘polluted’ water (water with added red cider vinegar and pieces of plastic). They really took on board the message we were trying to send, that careless littering can result in dirty water, reflecting how important education is in the face of current environmental issues.

Jeanette with the dirty water concoction

Aside from education, what else can be done to fight the plastic problem? An idea was presented to myself, Jamie, Pierce and Hannah on the way back from a trip to Kruger National Park. We stayed at an eco-friendly, community-run site called Shik Shack Backpackers in Hoedspruit, where the focus was encouraging locals to build a sustainable space for themselves where they can learn new skills, sell crafts, and create long-term solutions to everyday problems. Our guide spoke passionately about the project as he showed us around the site, demonstrating many ways in which ‘trash’ can be re-used creatively. There were children’s swings made from cut up tyres, a seedling nursery with plastic bottle walls, and even a very colourful bottle-top curtain! 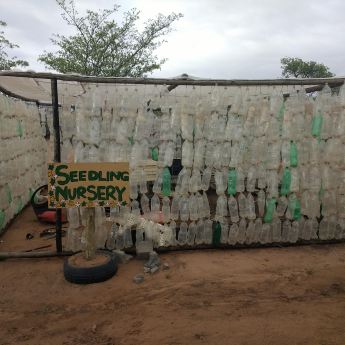 We left with lots of ideas and inspiration to start collecting discarded plastic and getting creative back at Campfornis. For example, Hannah has decided to build a workshop on camp made from recycled materials, to be used for storing more recyclables that we can take to the schools for craft projects. Through upcycling plastic and other materials, we can help to reduce the amount that ends up in landfills or in our oceans, tidying up our towns and reducing the negative impacts upon animals, our health, and the environment. The end product is only limited by our creativity!

← Schools out!
Snaring into the abyss →